“The uniform is a steady reminder that you have pledged yourself to the same high ideals of living as have your brother Scouts and that dressed as a Scout, you must act as a Scout. It challenges you to do those things that stamp you in the eyes of the world as a real Scout and it keeps reminding you that you have promised to do your best.” – from the Boy Scout Handbook, Sixth Edition, 1959

The Scouting program in America has always included uniforms for its members and volunteers to identify members and show they are part of the Boy Scouts of America. Scouts and leaders should wear their uniforms to all patrol meetings, troop meetings, and scout outings.

The tan and green Boy Scout uniform is a well-known symbol of American scouting. All scouts in the program wear the same uniform with the major differences being the badges each scout has earned and the troop specific neckerchief.

The official dress uniform is commonly referred to as the ‘Class A’ uniform but, officially known as the “Field Uniform”. Most scout troops also have an “activity uniform”, referred to as ‘Class B’ which is often a t-shirt customized just for the troop. Activity uniforms are worn for work projects, sporting activities, and other events in which the dress uniform might get damaged.

This is the more casual uniform and is required for informal events such as service projects, as a “fatigue” uniform on campouts, at summer camp at all times (except when a full uniform is required), working on Eagle Projects, etc.

Troop 285 Tee shirt, or BSA polo shirt, or Other BSA / O.A Tee-shirts. BSA pants or shorts as indicated for Class A. In some cases (service projects) the Scoutmaster will indicate a “Work Class B” where jeans and a troop 285 t-shirt is appropriate.

If BSA shorts are worn, Scout socks are required (with exception for less formal situations).

The class B or activity uniform may in certain instances (at Scout Camporees or service projects, for example) be required to be consistent for the troop as a whole – this is referred to as “Troop Class B”.  Most other times it is considered an individuals’ choice – “Scout Class B.” The key difference is that Troop Class B requires the Troop 285 T shirt.

Special uniform Note.  At no time will T-shirts or other garb that advertises or depicts products, actions or events inconsistent with Scouting values be allowed. For example, a shirt advertising beer or cigarettes would be unacceptable. Camouflage clothing of any type is not allowed by BSA regulations.

The Uniform is an important part of delivering the complete Scouting experience to your scout.

Wearing uniforms has been a method of the Scouting movement from the beginning. Decades of experience show uniforms have many benefits, including these:

For these reasons, all parents and Leaders should emphasize to their Scouts the importance of wearing the correct uniform at all occasions.

Use the following websites or go the Musselman Scout Shop. 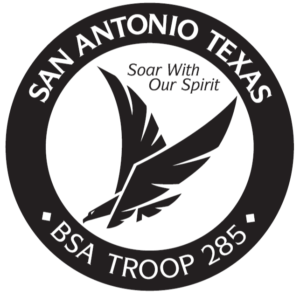